Back to DigitalMR in the Press

Social media research specialist DigitalMR releases latest findings on what customers are saying about tablet PCs on the internet.

The overwhelming majority of customers are highly positive in their views on tablet PCs as expressed on the internet. DigitalMR measured thousands of comments for slate devices across Dec 2011 to Jan 2012. 71% of all views measured were positive with only 29% negative. Apple recorded a 32% share of all positive comments and 35% of the smaller pool of negative ones. Hot on its heels is Amazon with 30% of positive mentions and a 33% share of negative.

Results are based on comments posted by consumers on the major tablet brands made by: Apple, Motorola, Samsung, Blackberry, HTC, LG, HP, ASUS, Amazon and Sony across Dec 2011 to Jan 2012.

Managing Director of DigitalMR, Michalis Michael commented: “Can Apple maintain its dominant position among tablet PCs? It will be interesting to see if Amazon’s Kindle Fire tablet can continue to convert its positive online sentiment into sales.”

The average NSS taken across all brands measured is 42% which is high compared with other industry sectors, although slightly down on the average NSS for Jul-Aug 2011 (50%). Customers are still generally satisfied with tablet products and services and are happy to spread the word online.

Apple and Amazon both achieved a below average NSS score of 38%, but given their relative dominance in the market, customer expectations are likely to be higher. Tablet brands that achieve the highest NSS are Sony 72% and HP with 56%. The lowest performing tablet was Motorola with an NSS of 33%.

Summary of positive and negative posts and overall NSS 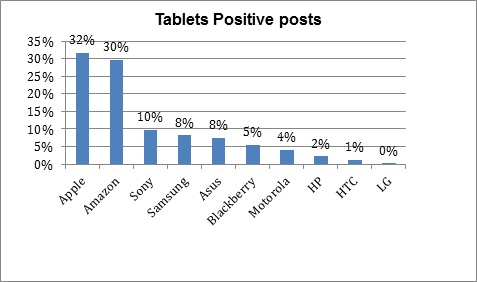 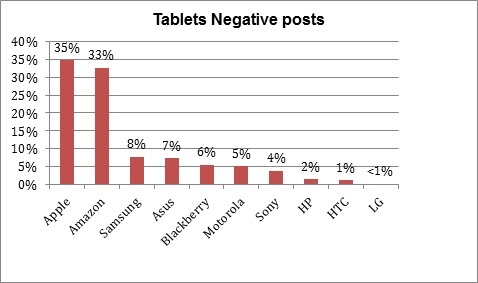 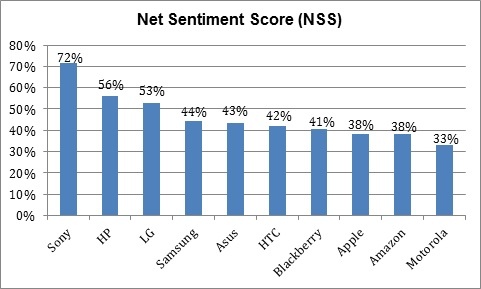 Sony
“I played with the Sony at Best Buy and liked it as far as weight and feel go. I like that "fold over", or whatever they call it. It felt light too”.

“The Sony tablet (I own one)...you have the play station store and the Sony can play downloaded movies easily The design of Sony tablet s makes the tablet easy to hold, and the tablet is extremely light”.

HP
“The best case is without a doubt is the one made by Stilgut~ purpose made so fits perfectly, access to all ports, holds the HP tablet at various angles and looks very classy... not cheap but well worth every penny..”

“I have a HP dm1 ... The HP build quality is much better; there is no question about it.. I just bought the HP last week which is $480 (brand new model). Given that, the HP is worth it for the build quality alone”.

Amazon
“Nerds who like to tweak shouldn't be buying such a device. They should buy something that's designed to be more tweakable. The Fire is not designed to be a tablet period. Amazon never markets it as such and the word Android can't even be found on the product page. It's designed as a device to facilitate consumption of Amazon content. Anything you get out of it beyond that is just a bonus”.

“Amazon purposely made it so that just about all you can do with the device is stream their content - this is how they make their money. They actually lose money on the device itself. It's a great $200 device for doing that and not a whole lot else”.

Motorola
“Yeah, kind of disappointed at the book reading support of Motorola Xoom,out of the box, day 1. The google books app is nice and responsive but there is no way to use it to read your own pdfs, epubs etc. that I can find. I downloaded Adobe Reader and Aldiko but neither are completely stable and as smooth and responsive”.

“I am having a problem with Google voice. Actually it’s more about the Motorola Xoom itself. The microphone port is not sensitive enough to pick up my voice for a call. It all works great if I use a bluetooth device, but without it no one can hear me.

How can tablet brands use social media to their advantage?

Tablets can use analysis of data from websites and other social media in the following ways:

About the syndicated tablet report

For further information on the UK Banking Social Media Report.

About DigitalMR
DigitalMR understands what people think and feel when they share views online. It is a specialist agency which provides a holistic approach to web based market research. It specialises in utilising social media research, especially active web-listening, and online communities to enhance its business consulting approach. The agency has pioneered new methods in online focus groups alongside tools such as video diaries, bulletin boards and online ethnography. DigitalMR is headed by founder and Group MD, Michalis Michael and has offices in London UK, Nicosia Cyprus, and Columbus Ohio, in the US.

About SocialNuggets
SocialNuggets technology delivers real-time market intelligence for fast moving industries by analyzing data from various social media sources with a mission to liberate social media data and sentiment analysis for use in real-time research of brands, products and features. SocialNuggets delivers ready to use market intelligence for various industry verticals including consumer electronics and banking. SocialNuggets data is delivered in bite size, ready-to-consume, infographics and is also available in the form of a full access to our data warehouse for analysis and integration with customers’ data. SocialNuggets, a Serendio company, was founded in 2011 with headquarters in Santa Clara, CA. For more information, please visit www.SocialNuggets.net