London, April 16th 2012 – Latest online research by DigitalMR shows that Samsung remains the most discussed smartphone brand on the internet, accounting for 35 per cent of total customer smartphone comments. Samsung, along with other Android models HTC and Motorola are the top three most mentioned smartphone brands accounting for over two thirds (67%) of all measured customer comments online. Samsung models attract the highest share all positive mentions with 34%. Nokia achieves highest Net Sentiment Score with 51%.

Social media research specialist DigitalMR releases latest findings on what customers are saying about smartphones on the internet.
DigitalMR analysed over 300,000 customer comments about smartphones across December 2011 to January 2012. Nearly two-thirds (65%) of these customer views are positive, compared with 35% negative.

Android models are the most talked about smartphone brands. Samsung attracts the most mentions with a 34% market share of all positive comments and a 37% share of the smaller, negative comments group. Next placed is HTC with 22% positive mentions and 18% negative, followed by Motorola with 11% positive and 13% negative.

Together, the three Android brands account for two thirds (67%) of all measured online customer comments regarding smartphones.

Established smartphone models from Apple and RIM (Blackberry) only account for 11% and 8% of total customer comments respectively. Blackberry’s consistent low shares of online conversation have coincided with poor Q4 trading results, prompting its recent announcement to place more of its focus on the corporate market.

Managing Director of DigitalMR, Michalis Michael commented: “Our social media monitoring over last 6 months has consistently shown Android models as the most discussed brands. While Apple can at least draw on its huge presence in the Tablet market, it seems RIM is going back to its core focus of corporate customers”.

Among the big three Android brands, HTC had a NSS of 39%, followed by a slightly below par score of 27% for Samsung and just 20% for Motorola which was the lowest overall NSS. Apple achieved the second lowest score with 24%. The highest NSS is achieved by Nokia (47%). 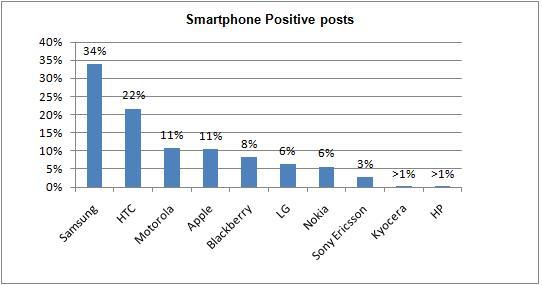 DigitalMR measures thousands of customer posts regarding the services and features attributed to smartphones.The issues relating to “Operating system” and “Service provider” features generate the most comments overall – both positive and negative.

“I knew that android was just a fad for me, and that become true when I saw the Lumia 900. But still...I'd never had a Nokia and the lumia 710 provided me some exposure. The 710 is faster than the DVP data wise. Since data is the primary way I use the phone, it is important. There is a significant speed difference here both by wifi and on radio”.

“The Nokia 710 is fast and fluid, no hiccups even when downloading and installing apps. It feels solidly built, though I didn't drop it (yet) to test. Call volumes are good, so is the speakerphone”.

“So, I might be getting a Kyocera Echo. It's a duel-screen, Android, Windows 7 smart-phone. It looks pretty neat!!”.

“Again, I have poor eyesight. My Kycoera Echo basically has everything my laptop does. I can search the android market online and anything I choose to download is sent directly to my phone. I can manage all my contacts online and the changes are made automatically to my phone. Sweet!”.

“My iPhone is 15 months old. The speaker now does not work and people cannot hear me. It has had minimum use and is in mint condition and it has lasted 15 months. Vodafone outlet told me I had to pay $280.00 to swap it for a refurb phone. What a rip-off. I bought an expensive phone and it should have lasted more than 15 months”.

“This just started the other day. I can get into the app store on my Iphone 3 with IOS 3.1.3 but when I go to get an app for free or to purchase, they "Free" button does not respond when I select it. I can't select the ratings section on the bottom of the page for an application either. I have the same problem with application that cost $$$”.

“Dude, What the hell. I own a crappy Motorola FlipSide and I wanna root it and it wont work! I tried downloading z4 root on my pc. And its not a full Download its like saying Windows can't find this file”.

“I just got a Motorola Triumph a few days ago, and I've never been able to get a GPS signal.....Is there a setting or a way to fix the GPS? Other than that I like the phone and would like to keep it. I tried to go to Motorola's site and was blown away by how unhelpful it was. It doesn't even list my phone in the support section”.

How can smartphone brands use social media to their advantage?

Smartphones can use analysis of data from websites and other social media in the following ways:

For regular reports and more information:

About SocialNuggets
SocialNuggets technology delivers real-time market intelligence for fast moving industries by analyzing data from various social media sources with a mission to liberate social media data and sentiment analysis for use in real-time research of brands, products and features.

SocialNuggets delivers ready to use market intelligence for various industry verticals including consumer electronics and banking. SocialNuggets data is delivered in bite size, ready-to-consume, infographics and is also available in the form of a full access to our data warehouse for analysis and integration with customers’ data.

SocialNuggets, a Serendio company, was founded in 2011 with headquarters in Santa Clara, CA.