Back to DigitalMR in the Press

US banks - A full 68% of negative comments online about the US financial sector are attributed to just two banks, CitiBank and Bank of America – What was going wrong?

DigitalMR analysed thousands of customer comments about high street banks for the month of June 2011. Over half of these customer views are negative, compared with 45% being about positive customer experiences.

The four most mentioned banking brands, with the highest number of consumer comments were: CitiBank (32%), Bank of America (23.50%) followed by American Express and Wells Fargo (both 17%).

There was, however, a large difference between the positive and negative mentions that these banks generated. American Express (30%) and Bank of America (23%) attracted the largest proportion of positive posts but Bank of America also attracted the second highest number of negative comments (24%). By comparison the bank that had the highest proportion of negative posts was Citibank (44%).

Taking the difference in positive and negative posts into consideration the clear winner for June was American Express with a Net Sentiment Score (NSS) of 58% followed by Capital One with 19%. The high NSS score for American Express shows an overall high satisfaction level for users of this service.

The two banks with the lowest net-sentiment score were CitiBank (unsurprising, perhaps, given its proportion the total negative posts) with a NSS of -52% and US Bank which achieved a score of -59%. CitiBank’s higher rating is attributed to the fact that although they were the subject of the highest amount of negative comments they also were the subject of 17% of all positive comments about financial service providers. Much of the negative commentary was related to the June revelation that hackers had accessed 200,000 Citibank account holders’ details.

The banks with the highest and lowest rated NSS scores remain unchanged from April, the date of our last syndicated report, when American Express led the group, and US Bank brought up the rear.
The US Banking Sector should take note that of the ten banks we analysed conversations about, seven have either a neutral or negative NSS. This means that overall the majority of people were using social media far more to criticise than compliment their banking service.

DigitalMR’s report (powered by SocialNuggets) analyses thousands of customer comments posted via a range of relevant finance related websites and open access social media platforms. It measures not only the number of comments posted by consumers on the internet, but also sentiment – whether these posts are positive or negative.

Results are based on comments posted by consumers on the major US banks: CitiBank, Bank of America, Wells Fargo, US Bank, American Express, HSBC, Capital One, Barclays, JP Morgan Chase Manhattan and US Bancorp.

Ryan Rutan, President of DigitalMR USA commented: “the findings indicate that American consumers who utilize social media platforms are voicing frustrations about their banking experience at a higher rate than positive experiences, but that certain brands are achieving a net positive sentiment.  This tells us that although the balance of comments are on the negative side, it is not strictly an outlet for dissatisfaction. This is easily seen in the divergence of the findings related to CitiBank and American Express.  While conversations about CitiBank accounted for nearly a third of all mentions of companies in the sector (suggesting a wide exposure), they were negative 76% of the time. By contrast American Express should be pleased to see while they accounted for a lower total volume of posts, that 79% of comments about their bank were positive.  Amex has, for the second time this year, the highest net sentiment score of all banks we monitored.”

The average NSS taken across all banks measured is -10%, which shows that US consumers continue to see social media as a space to share experiences of frustration and unhappiness with the service they had experienced. This is a lower NSS however than the results from our  December 2010 analysis which showed in the four months from July – October the cumulative NSS for US banks was -28%.

2)  Breakdown of positive and negative posts 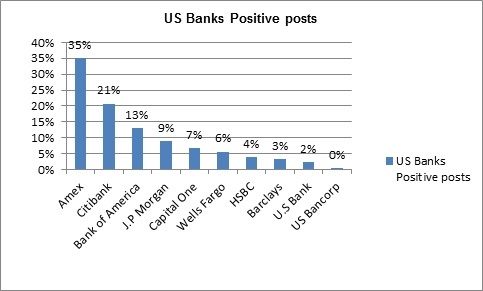 DigitalMR measured thousands of customer posts across June regarding the services and features that banks offer. Services attracting a much higher proportion of positive mentions to negative ones were: Credit Card Incentives (18% positive vs 1% negative).

The service attracting a higher proportion of negative comments was Credit Cards with (26% positive vs 19% negative) This was followed by conversations about mortgages which displayed a negative sentiment being 17% of all negative conversations regarding a particular service.

4)  In their words –customer comments

American Express (Amex)
Positive: " Amex, you guys are excellent. Your transactions reconcile faster then any other banks I deal with, your gold card knows no limits (pardon the pun), & your customer service is top notch. Never an issue disputing a charge on the off chance I have one and each time I have to use customer service, the staff is empowered to take a corrective step if necessary rather then asking a manager ever 30 seconds".

Positive: "Setting up the account, getting help from customer support, and get started overall was incredible easy and fun. After about 4 months, I'm still a pretty content customer. They reimburse for 2 atm transactions every month which is pretty good for me".

Negative: " I've had a couple of accounts with Citibank and all of them have been horrible. Starting with my longest account, the CITI divident Mastercard, I had been pretty satisfied up until the last 8 months. Out of nowhere all of the sudden they demand I pay $200over the minimum payment or they will raise the interest rate. Needless to say, either opotion in this economy is unnaceptable. I called customer service, no help there... Horrible".

Negative: " U S Bank people are mean, unfair, inconsistant and rude. The employees have no idea what they're doing and they talk down to you like you are a nobody. They have caused too many headaches and lost money and I will never ever recommend them to anyone nor will I ever bank here".

5)  How can Banks use social media to their advantage?

About the syndicated banking report

The monthly banking report monitors thousands of customers’ online conversations through comments posted on open-access social media platforms such as Twitter and Facebook, forums, blogs, microblogs and commercial websites, for US banking services.

Title: US banks - A full 68% of negative comments online about the US financial sector are attributed to just two banks, CitiBank and Bank of America – What was going wrong?
Category: DigitalMR in the Press
Posted: 19th of August 2011