The Halifax is most talked about bank online in January with a 20% share of comments, according to latest web listening report from DigitalMR

The top three mentioned UK banks on the internet in January 2012 are The Halifax, HSBC, and Royal Bank of Scotland (RBS). Halifax achieves the highest share of positive comments with 21%. Lloyds Bank (19%) accounts for the highest share of all negative mentions, but only attracts 10% share of positive ones. Clydesdale Bank attains the highest Net Sentiment Score with 66%. Findings are according to the latest social media monitoring report from social media research specialist DigitalMR.

DigitalMR’s report (powered by SocialNuggets) analyses thousands of mentions and customer comments posted via open access social media platforms and relevant finance related websites. It measures not only the number of comments posted by consumers on the internet, but also sentiment – whether these posts are positive or negative.

Taking each bank’s positive and negative scores into consideration, Clydesdale achieves the highest Net Sentiment Score (NSS) with 66%, followed by Bank of Ireland (49%) and ING Direct 41%. Across January only one bank achieved a negative NSS, Lloyds with (-6%).

Managing Director of DigitalMR, Michalis Michael commented: "Although ING Direct consistently achieved the highest Net Sentiment Scores across 2011,  it would appear that Clydesdale Bank has made the the best start in 2012."

2) Breakdown of positive and negative posts 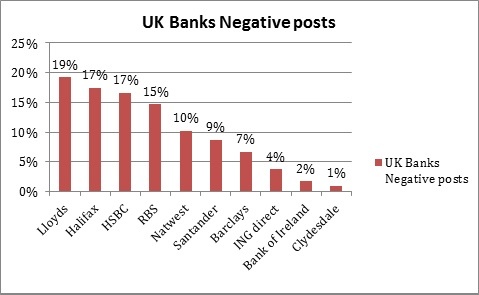 3) In their words –customer comments

Clydesdale Bank
“Although I have not received the cheque yet I have received confirmation from Clydesdale Bank that they are going to pay my PPI back - just over £12,000. I am absolutely delighted!!“.
https://forums.moneysavingexpert.com/showthread.php?t=524031&page=1295#post50618315

“I love talking to the people at Clydesdale Bank! There’s something about having a fellow scot on the other end that just makes it enjoyable”.

Bank of Ireland
“There was a stickup at the bank but sure it all got resolved with hugs. Bank of Ireland this what dreams are made of!”.
https://twitter.com/razmotaz/statuses/162582854973399041

“Bank of Ireland has a very fancy new look in Ranelagh. Looks expensive too”.

Barclays
“That advice from Barclays is not correct. Regardless of where the payment is made to the 8% interest element of the refund is taxable. That is actually disgusting as someone tell me where I can get 8% interest on Savings. Plus any tax payer unless they had used all their allowance would no doubt have put it in at least cash ISA; the highest rate at the moment seems to be 3.1% “.
https://forums.moneysavingexpert.com/showthread.php?t=3761205#post50607137

“ ...you could try telling Barclays you were following their staff's advice, however, I think you're best just remembering it for future reference. Their customer service isn't the best”.

Lloyds
“Shocking service from Lloyds TSB. Sent all my personal info to wrong address and they just don't care”
https://twitter.com/Mark__Official/statuses/156714230727442432

“The new Lloyds TSB ad campaign really needs a little tweak.’Open all hours' should be appended by 'for shit customer service, 24/7”.

4) How can Banks use social media to their advantage?

DigitalMR understands what people think and feel when they share views online. It is a specialist agency which provides a holistic approach to web based market research. It specialises in utilising social media research, especially active web-listening, and online communities to enhance its business consulting approach. The agency has pioneered new methods in online focus groups alongside tools such as video diaries, bulletin boards and online ethnography. DigitalMR is headed by founder and Group MD, Michalis Michael and has offices in London UK, Nicosia Cyprus, and Columbus Ohio, in the US.

SocialNuggets technology delivers real-time market intelligence for fast moving industries by analyzing data from various social media sources with a mission to liberate social media data and sentiment analysis for use in real-time research of brands, products and features. SocialNuggets delivers ready to use market intelligence for various industry verticals including consumer electronics and banking. SocialNuggets data is delivered in bite size, ready-to-consume, infographics and is also available in the form of a full access to our data warehouse for analysis and integration with customers’ data. SocialNuggets, a Serendio company, was founded in 2011 with headquarters in Santa Clara, CA.

Title: The Halifax is most talked about bank online in January with a 20% share of comments, according to latest web listening report from DigitalMR
Category: DMR in the Press
Posted: 5th of May 2012