Samsung is the most discussed smartphone brand on the internet, accounting for 30 per cent of total customer smartphone comments online.  Samsung, along with other Android models HTC and Motorola are the top three most mentioned smartphone brands accounting for over two thirds (68%) of all measured customer comments. Samsung models attract the highest share all positive mentions with 30%. HP achieves highest Net Sentiment Score with 50%, slightly ahead of Nokia (47%).

London 05 January–Social media research specialist DigitalMR releases latest findings on what customers are saying about smartphones on the internet.

DigitalMR analysed over ¼ million customer comments about smartphones across September-October 2011. Nearly two-thirds (62%) of these customer views are positive, compared with 38% negative.

Together, the three Android brands account for two thirds (68%) of all measured online customer comments regarding smartphones. Although Apple has fewer overall mentions it attracts more negative mentions than Motorola with a 17% share of all negative comments. This may well be related to customers experiencing teething problems when switching over to the new iOS operating system in October.

Established smartphone models from Apple and RIM (Blackberry) only account for 14% and 7% of total customer comments respectively.DigitalMR’s analysis (powered by SocialNuggets) is based on comments posted via a range of relevant websites and open access social media platforms. It measures, not only the number of comments posted by consumers on the internet, but also their sentiment – whether posts are positive or negative in nature.

Managing Director of DigitalMR, Michalis Michael commented: “The march of the Androids continues with their increased sales and market share gains being matched by consumers’ conversations online.”
All the brands measured, achieve a positive Net Sentiment Score (NSS) for Sep-Oct. NSS provides an overall percentage score of net positive posts.

The average NSS taken across all the brands measured is 24%. This shows customers are generally very happy with their devices and are sharing the good news online.

Of the three most talked about brands on the web, HTC had a NSS of 31%, followed by 29% for Motorola and a slightly below par score of 23% for Samsung.

The highest NSS is achieved by HP with 50% (although this is derived from a relatively small base number of mentions) followed by Nokia (47%) with the lowest NSS recorded by Sony Erickson (4%) and Apple (6%). 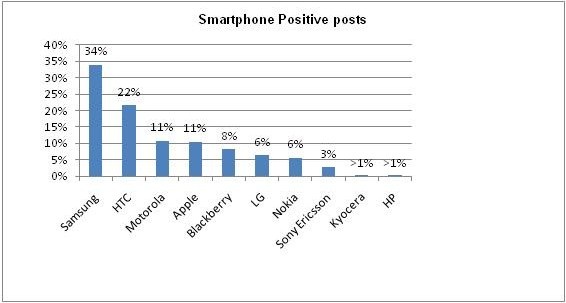 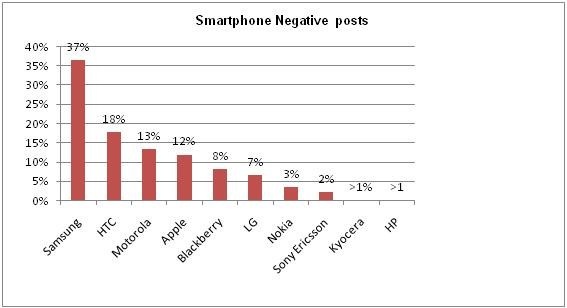 DigitalMR measures thousands of customer posts regarding the services and features attributed to smartphones.

“Operating system” and “Service provider” features generate the most comments overall. “Operating system” attracted a 17% share of positive mentions which was outweighed by 28% share of negative ones. The next most mentioned feature “Service Provider” produced 23% positive vs 19% negative. “Body” – the design and shape of the handset - received far more positive comment than negative (20% share positive vs just 8% share of negative).

In their words – Customer comments for models with the highest and lowest Net Sentiment Scores.

“Facilities are numerous especially when considering its small size. It is user friendly for all operations, but unable to use all the icons that are that is displayed. The AT&T menus are not all available when selected. Also need to watch battery status during use as it only allows about 15 hours before a re-charge is called for. Have to get use to using it yet”.

Nokia:
“Excellent Choice. It still remains Nokias best phone despite other models released after it. I have one, its the most amazing device and i know i'll be keeping mine for years and years and with easy free updates for the next five years atleast, its a solid investment”.

“Well because Nokia N8 cheap now because its been on the market for so long, but its a pretty solid phone as is”.

“Agreed! I do feel disappointed - I ordered on the 7th but my order still says processing. Every person I know who wanted a 4S now has one except me - the difference - I'm the only person to pre order directly from apple rather than turn up at a store or get one through my phone company! Seems pretty unfair really!!!!”.

“Only issue I have with Iphone 4S is the way it drains the battery so quickly! Always keep a charger handy!!!”.

“After a week of normal usage, plastic cover makes some noise - it's not as solid as it sholud be. I've found the same problem with PS3 pads. Looks like Sony want to save on plastic and is trying to advertise it as recycled materials (probably plastic collected on waste dump)...”

“After upgrading from x10 mini pro, the mobile BRAVIA screen just blew me away. Not really a Smartphone fan as I am using a tablet for anything else other than calling / messaging and now, sweating out!”.

How can smartphone brands use social media to their advantage?

Smartphones can use analysis of data from websites and other social media in the following ways: