DigitalMR analysed thousands of customer comments about high street banks for the month of June 2011. Over half (57%) of these customer views are positive, compared with 43% negative.

The three most mentioned banking brands are: Halifax and HSBC with a 16% share of all comments, followed by Lloyds TSB (15 %).

However there is a large difference between the positive and negative mentions that these banks generate. Halifax (20%) and HSBC (16%) attracted the largest proportion of positive posts, while Lloyds TSB (21%) received the most negative posts, followed by HSBC (17%).

This follows the announcements from the Lloyds Group in May that it was putting aside £3.2bn to pay customers who had been mis-sold payment protection insurance and that at the end of June it was cutting a further 15,000 jobs.

Taking the difference in positive and negative posts into consideration the clear winner for June is the Halifax with a Net Sentiment Score (NSS) of 44% followed by NatWest with 31%. Lloyds TSB was one of only two banks that achieved negative a NSS with minus 15%. Bank of Ireland achieved the lowest NSS with minus 51%.

DigitalMR’s report (powered by SociaNuggets) analyses thousands of customer comments posted via a range of relevant finance related websites and open access social media platforms. It measures, not only the number of comments posted by consumers on the internet, but also sentiment – whether these posts are positive or negative.

Managing Director of DigitalMR, Michalis Michael commented: “these findings are very encouraging for the Halifax and NatWest brands as they are achieving an overall high net positive sentiment. However, recent events seem to have impacted on the Lloyds TSB brand and it will be interesting to see how online customer sentiment reacts to the planned job cuts announced at the end June.”

The average NSS taken across all banks measured is 14%, which is good news for the banking industry as it is now attracting more positive sentiment across the internet than it does negative.

2) Breakdown of positive and negative posts 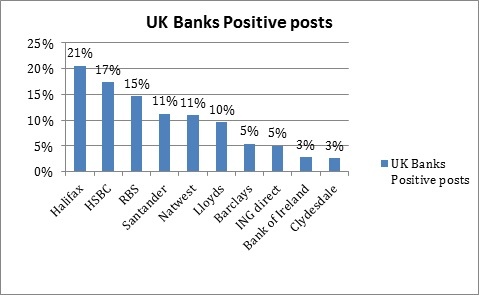 DigitalMR measured thousands of customer posts across June regarding the services and features that banks offer. Services attracting a much higher proportion of negative mentions to positive ones were: Customer Care (18% negative vs 9% positive) and Bank Employees (16% negative vs just 4% positive).

While the service attracting a higher proportion of positive comments was Credit Cards with (18% positive vs 11% negative).

4) In their words –customer comments

“We feel misled by Lloyds TSB insurance in that when it comes to claims for kitchens it regards them as a set as opposed to fixtures and fittings. Other insurers make it clear that the kitchens are regarded as fixtures but there is no clear distinction in the Lloyds TSB policy document”

“Halifax is a great bank, excellent service, good rewards for loyal and existing customers. A fair deal, same for new and exisiting, none of these "brand new customers only" banks. Still interested in you as a customer wether you're new or been with them years”

“THE WORST BANK!!! making it very dificult for my partner to cancel his platinum account even though he has been told previously he can do this by their work staff.........I've been with other banks that  I am not too keen on but I prefer them over   Lloyds TSB.Prepare to be completely ripped off by Lloyds TSB!!!”

"Terrible customer service, sky high charges, difficult to cancel. I have had nothing but trouble with this bank...

In short, ridiculous charges for the tiniest things, unhelpful staff, and silly policies mean that I am still trying to close my account to date”.

“Halifax has an excellent current account for those of  who keep our accounts in credit. * £5 net per month (£6.25 before tax) paid to you, provided you pay £1k per month in. So on an average balance of £1k, this is 7.5% gross! * One of the best internet banking systems. Very simple and easy to use, but has a lot of useful features. * 24/7 telephone banking, and lots of branches. Good customer service”

“Since reaching working age (10yrs ago) I've held current accounts with 5 different banks, and NatWest have been by-far the best, and here's why: Branches Branches are absolutely everywhere, even in the small back-water towns and villages. NatWest a *long* while ago declared that they would 'buck the trend' of banks closing branches by committing to keep theirs open”

“With a doubt, in my opinion, the Bank of Ireland is one of the worst banks I have ever dealt with. Their telephone banking service is so inferior, it's hard to believe. They told me today that a Direct Debit which had been presented in the morning was returned unpaid...yet when I lodged to cover the same Direct Debit later that same day, it was paid. It really does appear to me 'that the left hand does not know what the right hand is doing' when it comes to Bank of Ireland's telephone service. Avoid this bank at all costs...you have been warned!!!!”

“I cannot believe how bad Bank of Ireland bank is. Mistakes galore and an on-line banking system that would seem to have been written by a five year old it is so cumbersome. I moved a business account recently to this bank for better terms and cannot wait to move back out again even though it has cost a considerable sum to move in the first place”

5) How can Banks use social media to their advantage?

About the syndicated banking report

For regular reports and more information: