Survival of the fittest on planet "Market Research"

27th of December 2017 Michalis Michael The Future of MR

As a blogger, I always try to go for fancy titles that will hopefully attract readers; the problem with fancy titles is that sometimes they can be misleading – and this one is. This is not about the survival of market research companies within the industry. Instead, this is the first of a series of four blog posts about the survival (or extinction) of current market research methods, and the birth of new ones. Some known and loved methodologies (by some) will become extinct, while others may survive by evolving and adapting to the new world order.

The pace of new technology adoption is definitely picking up, as word of mouth amplification is accelerating with the help of social media. Incidentally, it has been over five years since DigitalMR filed for a patent in the US for what is called the “Amplified Customer Advocacy Model” (ACAM).  What took decades to go through the bell curve of technology adoption now takes a few years (less than ten) to go from early adopters to late majority and laggards.

Take smartphones for example, or digital assistants, autonomous driving, space travel, and the re-birth of Machine Learning and by extension Artificial Intelligence; all at different stages but moving really fast… certainly much faster than in the past. The singularity moment is coming closer and closer – 2045 according to the graph below, which was published in The Times Magazine on Feb 10th 2011 (Lev Grossman). 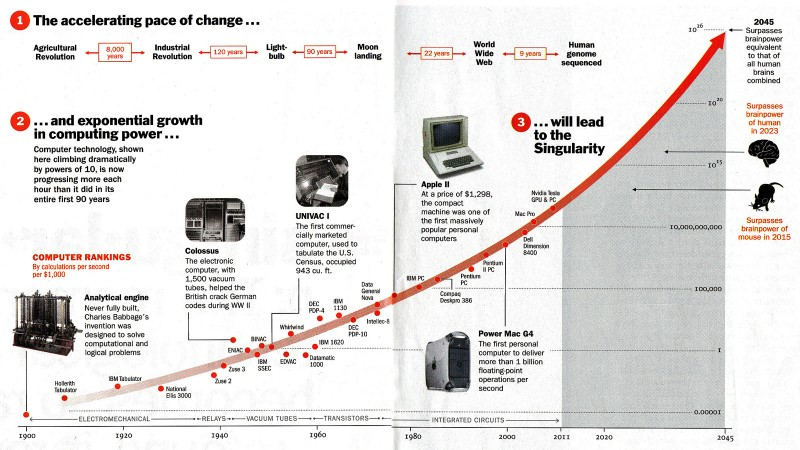 As I often say when I speak at conferences, there are 3 main sources of data for customer insights:

Now these are the main ones, but the list would not be comprehensive if I did not mention a couple of (currently) niche sources, such as neuroscience (e.g. EEG1, EMG2 or GSR3) and observation (e.g. ethnography or eye tracking).

The three blog posts following this one will focus on:

I don’t know if Darwin could ever imagine that his thesis would be adopted by so many, and used in so many ways other than about life on planet earth. It is as if he stated a law that has been proven time and time again, almost without exception (at least none that I know of), which applies in nature, in business, in politics and in society. On the other end of the spectrum, there is a thesis that has been disproven so many times, to the extent that is now used more as a way to ridicule an organisation, and that is “too big to fail” - like Lehman Brothers, Enron, the Titanic, or the dinosaurs.

The point is, asking questions the way we currently do, which accounts for over US$ 50 Billion of the total US$ 65 Billion that is globally spent on Market Research each year, is not too big to fail either. Dear colleagues, brace yourselves!