How Many Micro Influencers Equal One Celebrity Brand Ambassador?

One would think this is an easy question to answer; just count their number of followers... Well, sadly it is not that simple. If it was I would have probably found another subject to write about; one that is still unexplored, or controversial, or a buzz phrase that everyone uses but no one really knows what it means exactly. I have a feeling this week’s subject meets each and every one of the said criteria.

First things first. The definitions.
There are quite a few definitions for different types of influencers so I will provide a couple for each and then share our view as to what seems reasonable.

In the image below you can see 5 tiers of influencers for Instagram and YouTube created by mediakix. Their definitions are based on the number of followers and average video views respectively. They call it standard terminology in influencer marketing (STIM) but I could not find it mentioned anywhere else so it might be wishful thinking that the below becomes standard one day - or I just missed it. 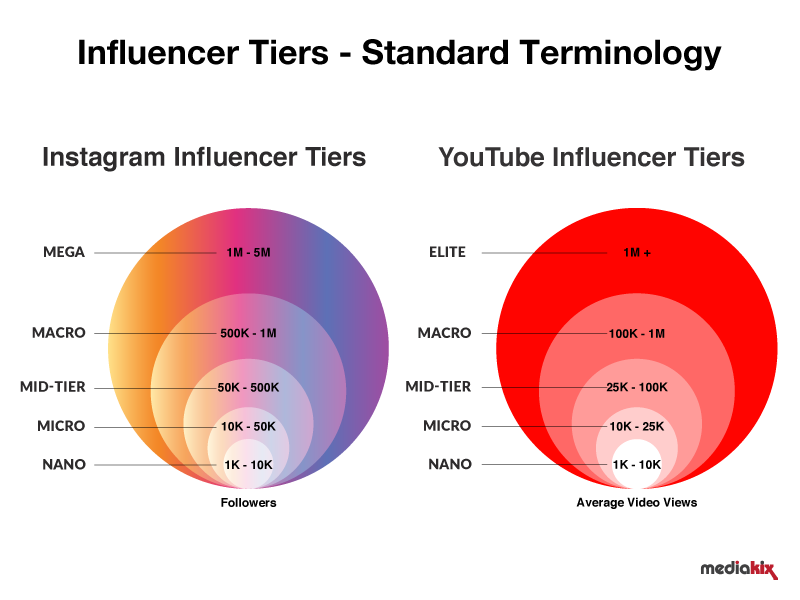 In another image which looks similar to the above, mediakix adds a sixth influencer level called ‘celebrities’ for those with over 5 million followers.

The next image below was created by whosay and found in an article by recode. It uses completely different names for each tier, and it talks about number of followers in general as opposed to being specific to a particular social media platform. It even provides average cost per post for each influencer tier. I am not sure how Tier 2 can be more expensive than Tier 1; it may have something to do with higher engagement. If any one of our readers has a view on this paradox please tweet @DigitalMR_CEO or send me an email. I have seen definitions of nano influencers as those with up to 1,000 followers so this paints quite a different picture. 50,000 followers sounds too many to still be called ‘micro’, let alone over 200,000.

The DigitalMR ideal split for the two tiers that we believe will revolutionise influencer marketing (i.e. nano and micro) is:

We believe that these are the two most important types of influencers because they are the closest to “a consumer like me”. If I had to choose between the two I would go with nano influencers, who do not even consider themselves influencers. They are more genuine and thus much more credible and believable. Managing a community of nano influencers is also way cheaper than what is shown in the image above.

DigitalMR has a patent pending for a process called the Amplified Customer Advocacy Model (ACAM). It is basically a process that creates a system around word of mouth (WOM). Instead of leaving it to luck whether consumers will sing the praises of a brand online, this system enables the brand to regain some control of the narrative from the ground up. The process makes full use of the two core DigitalMR SaaS products: listening247 and communities247. Who knows if we will get the patent... it was filed over 4 years ago. Of course now that the market caught up with our idea we are forced to play; with or without a patent.

Which message do you think is more credible and believable? Well, up until a couple of years ago we would see a lot of stats online about how much better micro influencers are than advertising on mass media, since consumers trust consumers like them more so than the marketing department of a brand. As with any innovation that is very successful, naysayers, slowly but surely, appear commenting either with their own bad experience or sharing a vitriolic speech they heard at a high profile conference and got impressed. Of course there will be failures and disappointments with any innovation but the point is to identify the issues and fix them. I hope this article will help a little toward establishing nano/micro influencer marketing as a valid marketing discipline.

What are the identified issues?

Issue #1: who has the ear of your audience?

Issue #2: to what extent can the influencers identified actually influence their followers?

Issue #3: what are the legal pitfalls? e.g. every paid influencer post has to be clearly identified with #Ad or labelled as a sponsored post

Issue #4: are the followers even real?

Issue #5: will the legitimate followers of an influencer be alienated by the fact that the person they thought was a friend is now getting paid by “using them”?

Issue #6: do the influencers really believe what they advocate or are they just doing it for the money?

I am sure there are more; can they be addressed in a satisfactory manner? You bet!

Where will the content that the influencers will share with their networks and friends come from? Will it be given to them by the brand or will they be allowed to create their own content so that they can maintain their authenticity? As it more often than not is the case, it should not be a question of OR but rather a matter of AND:

ROI is what everyone is after when it comes to approving marketing budgets. The obvious way to measure ROI is by linking the sharing of digital content directly to sales. If the product or service is sold online then that becomes a lot easier to track. It is as simple as including a link to a landing page in the post to be shared. On that landing page the lead should be able to easily buy the product or service. Of course we will never know about those customers who saw the influencer post, clicked on the link (or not) but decided not to buy anything at the time, only to then go on and buy from the website directly and not through the specific link that would connect them to the influencer campaign.

Having said that, there are many ways other than sales that a campaign like this can positively impact the success of a brand:

The upside of a nano/micro influencer community of hundreds or thousands of brand ambassadors who are motivated to share positive digital content about a brand or a cause is a ground swell approach that is way more trustworthy than traditional advertising. A successful brand ambassador community like this has the potential to drive sales growth at a fraction of the cost of celebrity influencers.

The downsides are related to all the issues described above; if these issues - one or multiple - are not under control the whole campaign may backfire and instead of creating positive impact it could indeed cost a company some money and brand equity. Thankfully once you know about them they are easy to address.

The answer to the title question

We took a long way to get to this answer but it was important to provide context.  If a celebrity influencer has over 5 million followers then according to the DigitalMR definition we would need at least 5,000 nano influencers or at least 500 micro influencers to match the number of followers. However, the followers of many people who do not even know they are influencers will do a much better job for the brand than those of a celebrity. Is it possible to manage so many people with measurable results on an ongoing basis? Reach out to me on Twitter @DigitalMR_CEO or by email to find out more about the patent pending process of DigitalMR.