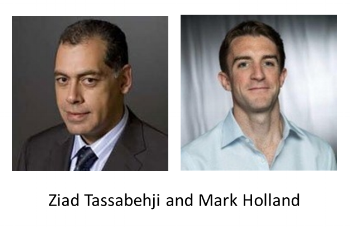 London, April 12 2018: London-based DigitalMR has just announced the addition of two new shareholders and members to its advisory board. The new members: Ziad Tassabehji and Mark Holland, join DigitalMR with extensive expertise in building successful businesses. Both are members of the Young Presidents’ Organization, the premier leadership organization of chief executives in the World.

Previously Director of Innovation and Investments at the Abu Dhabi Future Energy Company (ADFEC), Ziad Tassabehji is currently the CEO of Green Wave. ADFEC is the company that owns Masdar - the multi billion dollar renewable energy initiative undertaken by Abu Dhabi´s sovereign fund and zero-energy city in Abu Dhabi, while the latter invests in and incubates technology startups and sustainable housing projects.

Ziad Tassabehji said: “The market research industry is changing radically and DigitalMR has been an early player in this big growth area, providing data and analytics with proprietary models that are revolutionising how market research is conducted.

I am very optimistic about transformations that DigitalMR is leading. Their online market research tools involving data and analytics are smarter, faster, more efficient and less costly than traditional market research methodology.”

Mark Holland said: “It’s exciting to be part of such a progressive project that has been thoughtfully developed and is enabling more accurate insight into global sentiment.”

DigitalMR is a technology company with proprietary solutions for market research, that specialises in the use of Artificial Intelligence for customer insights and the integration of Social, Survey, and Sales data. Following years of R&D, partly financed by Innovate UK, DigitalMR’s main areas of research include text and image analytics, particularly sentiment and semantic (topics analysis), emotions analysis, and image theme and logo detection. DigitalMR has presence in numerous countries and works with blue-chip multinationals such as DIAGEO, Radley, Nielsen, TNS, Kynetec and many more.

DigitalMR CEO Michalis Michael said: “We are thrilled with the trust that Ziad and Mark are demonstrating in DigitalMR’s future. They are both very experienced entrepreneurs and investors so their decision to invest in DigitalMR means a lot to us as an organization. I look forward to working with them on our advisory board.”